Skip to content
Previous Next
What is The Relationship Between Speed, Distance And Time?

What is the relationship between Distance, Speed and Time?

Any object that moves covers a distance over time. Using these two parameters, we can calculate the speed. Speed is simply the rate of displacement. There is a formula that connects these three entities. If you encounter any distance, speed, time graph, then remember that the formula is the only way to finding the solution.

From the basic definition of speed as the rate at which the position of an object changes as it moves, we can derive this formula:

Pictorial representation of the above formula is: 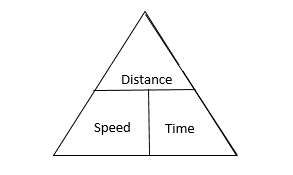 From the picture above, we get the formula for calculating time and distance as follows:

We already have what we need to know about calculations involving time, distance, and speed. Let’s now see the formulas in action using a few examples.

Jane goes to a shop which is 2 km away from their home. If she takes 2 hours to get to the shop, calculate her speed.

It takes a commuter train 2 hours to move from the first station to the next. If the train travels at a constant speed of 5km/hour, calculate the distance between the two stations.

An athlete runs at a speed of 5m/s and took 3 hours to complete a marathon race. Calculate the distance the athlete covered.

In this case, we have quantities given in different units. So, we first perform the conversion before applying the formula. Let’s convert time to seconds.

How do we compute an average speed?

We often expect that any moving object would do so at a constant speed. That is far from reality as it is nearly impossible to maintain a constant speed. In the above examples, we assumed constant speeds. What if the speed varies as in the case of a car moving uphill or the car had a puncture and needed a repair?

When calculating speed, we factor in the time it takes to complete the journey regardless of whether the object is moving or not.

A passenger bus left station A to station B, 240km apart. After traveling for 2 hours, the bus stopped for 30 minutes so that the passengers could freshen up. The bus then continues with the rest of the journey, which took another 3 hours 30 minutes. Calculate the average speed of the bus.

This lesson was prepared by Robert O. He holds a Bachelor of Engineering (B.Eng.) degree in Electrical and electronics engineering. He is a career teacher and headed the department of languages and assumed various leadership roles. He writes for Full Potential Learning Academy.