How To Find the Vertex of a Parabola

The focus of our previous tutorial was about the equation of a parabola. A parabola that has its vertex at the origin is of the form:

From this general equation, we can readily determine if the parabola opens upwards, downwards, left, or right.

We can readily determine the vertex of a parabola in the above form. The vertex is always at the origin point (0, 0). The general equation takes the forms:

What happens when the vertex is not at the origin?

In some cases, the vertex of a parabola is never at the (0, 0) point. The equation of such a parabola, therefore, takes a different form shown:

Parabolas with vertex away from the origin can also open upward, downward, left, or right.

How to find key points and lines of a vertical parabola?

Any Equation of a vertical parabola that has its vertex away from the point (0, 0) takes the form:

In such a case:

How to find key points and lines of a horizontal parabola?

Any equation of a horizontal parabola that has its vertex away from the (0, 0) point take the form:

In such a case:

The graph below shows an example of a parabolic curve. 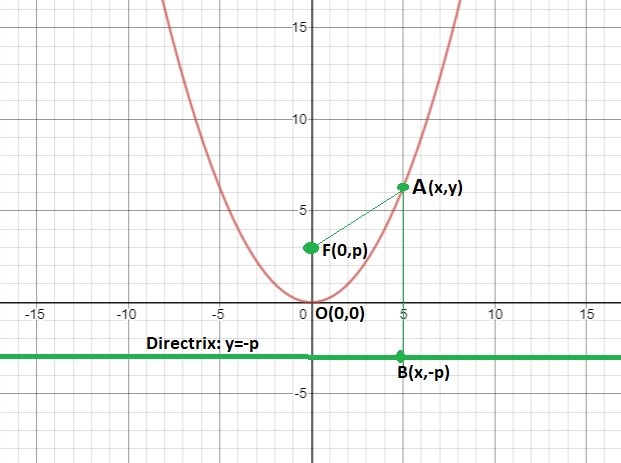 What is the focus point, vertex point, and equation of directrix of a parabola whose equation is:

We start by rewriting the equation into the general form of the equation of a parabola whose vertex is away from the origin.

Next, complete the square for the expression on the left.

The following algebraic identities will help you in completing the square very fast:

Next, factorize both expressions.

The equation is of the form

It is a vertical parabola that opens downwards since the x-coefficient is negative.

Next, find the value of p.

We can now find all the points and equations we need.

Directrix is a line whose equation is

Draw a graph of a parabola given by:

In this case, we already have a standard equation of a parabola. What we need to do is to derive all the parameters that we need to sketch the curve.

Next, we find all the key points and the equation of directrix and line of symmetry.

To accurately sketch a parabola, we will need two more points, the endpoints. The expression form computing the two sets of coordinates is

We now have all we need to accurately sketch the parabola in question. Take note of the key plotted points on the curve below:

For any parabola whose vertex is not at the origin, the vertex is (-h, -k). Or reverse the signs of h and k from the standard equation.

This lesson was prepared by Robert O. He holds a Bachelor of Engineering (B.Eng.) degree in Electrical and electronics engineering. He is a career teacher and headed the department of languages and assumed various leadership roles. He writes for Full Potential Learning Academy.